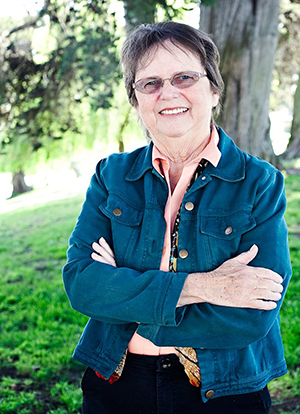 I’ve lived in many parts of this country, in Louisville KY, Wilmington DE, New London CT, the Palo Alto area of CA and now in Charlotte NC. I grew up in a hell-fire-and-damnation church for most of my formative childhood. By my early 20’s my image of God was a raven who sat on my shoulder and was ready to zap me whenever I did something wrong. By my late 20’s I was out of the church. But my problematic history in the church formed the trajectory of my life as I struggled to find a God I could love. As I look back on this time in my life I can see Christ’s footprints everywhere. Soon my husband and I joined a cult that focused on Jesus and His teachings, but not His divine nature.

Eight years later we left the cult. For the first time in my life I chose not to belong any more just out of a need to belong. I had heard God’s voice saying this to me: “I have an agenda for my life.” This thought changed my life, because I had no idea who the “I” was or what that agenda could be. So I started to ask myself, “What do I really(deep down inside myself) want to do,” not “what should I be doing.” I read through a lot of the eastern religions and in everything I read, I thought, “Oh, that’s what Jesus meant.” I particularly liked the Tao, because it was all about going with the flow of energy inside oneself and not pushing the river to make happen what I thought should happen.

I read many of the Christian saints, St. John of the Cross, Teresa of Avila, Julian of Norwich, the Cloud of Unknowing, Catherine of Siena and more. And I followed whatever I heard God saying to me; His voice became clearer and clear over time. I surrendered my life to Christ. And I walked on air for three days, until I came crashing down to earth with this thought: “Thou shalt have no other gods before me.” And so for three weeks I wrote a list of all the things that were more important to me than God. I called that list “gobs of gods.” The next 30+ years of my life have been full of God working on all these gods, so that I could just worship Him.

I came back to the church when my daughter, who was nine at the time, asked if she could say where she goes to church when the kids at school were talking about where they went. I asked her where she wanted to go, and she said, “Jeanie’s church.” And so we went there to church. And stayed in the church.

In the late nineties I began to study to be a spiritual director at The Spiritual Direction Institute, Mercy Center in Burlingame CA. Only two things in my life have really changed me: 1)being married and having children and dealing with who they actually are instead of who I wanted them to be and 2) doing spiritual direction. To be a director means that I sit with a person and consider what they have brought to the session, so that is one focus. Then, I have to listen for the Holy Spirit and what He wants me to say to this person, a 2nd focus. And thirdly, I have to notice my own reactions, what I would wish for this person and how what he or she is saying is affecting me. In other words I have to be present to all three of us. And I have to set aside my own stuff to be dealt with later, because none of my reactions are appropriate to direction.

Now everything I do, everything I am, comes from that training. The blog that I write, “By the Waters,” the books I have written all focus on how do we live this life in Christ? I don’t care what any one believes, theology is not important to me, the relationship to God is. I had two dreams in 2011 that pointed me to this purpose. In the first one I am talking to a favorite minister of mine and saying, “your job is to inspire the congregation, mine is to connect the dots.” As I pondered that dream, I realized that what I was meant to write about was the teachings of Jesus and to connect them to 21st c. life. Later that same year I wrote this down in the middle of the night and read it the next morning: “to make the kingdom real.” And so that is my task in launching this website, in everything I do. I am just writing about God’s invitations to us to leave the world behind and to join Him in His kingdom.

I leave all the healing in my life up to God who has been working on my list, “gobs of gods” for 35 years+.  If I am willing to follow His lead, and I am, then He is constantly healing and transforming me from the inside out.

Thy Kingdom Come! I’ve taken Jesus’s teachings about the kingdom of God which call us to live in His kingdom.

Exodus: Our Story, Too! The thesis of this book about the Exodus story is that it is the template that God has left us to show us how we go from slavery to the world to Canaan which represents God’s kingdom. Again, it is an invitation to go as deep as we can into the relationship with God.

Not yet published, but definitely in the works is Called to Help the Poor and Needy, a book of essays about this major theme in the Bible and how we are to respond to these people(s).